Leicester Conservatives campaigner and spokeswoman Mina Sharma spoke out against proposals set out by Leicester East's Labour MP Keith Vaz, which would see a 'giant football' monument installed in Belgrave Circle to commemorate Leicester City's historic Premier League win (Leicester Mercury, 12 March 2017), arguing that he would do better to focus on supporting businesses and local causes.

Despite being the MP for the past thirty years, Mr Vaz was quoted in the Leicester Mercury as saying that Leicester East is an "area of our city that has stood derelict for far too long."

In a letter to the Leicester Mercury (published on 16 March 2017), Mrs Sharma wrote: "Whilst not wishing to play down Leicester City's historic premier league success last year, is another 'monument' for Mr Vaz to pose in front of really what the area needs? His focus should really be on supporting businesses, helping to generate more jobs, and standing up for local causes such as fighting the proposed closure of Rushey Mead library. Local people deserve better than just his platitudes."

Mr Vaz was instrumental in the creation of another work of public art – The World Tree – at the Melton Road site, which cost £62,000. 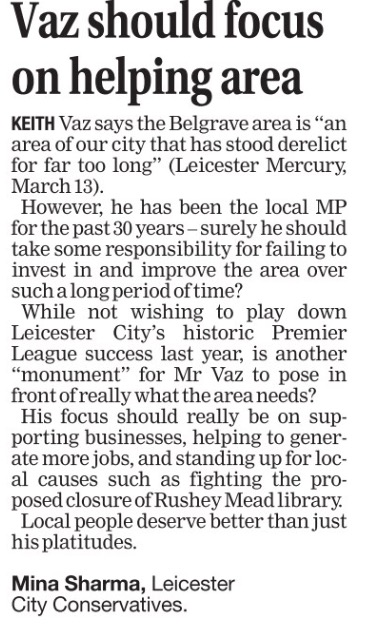