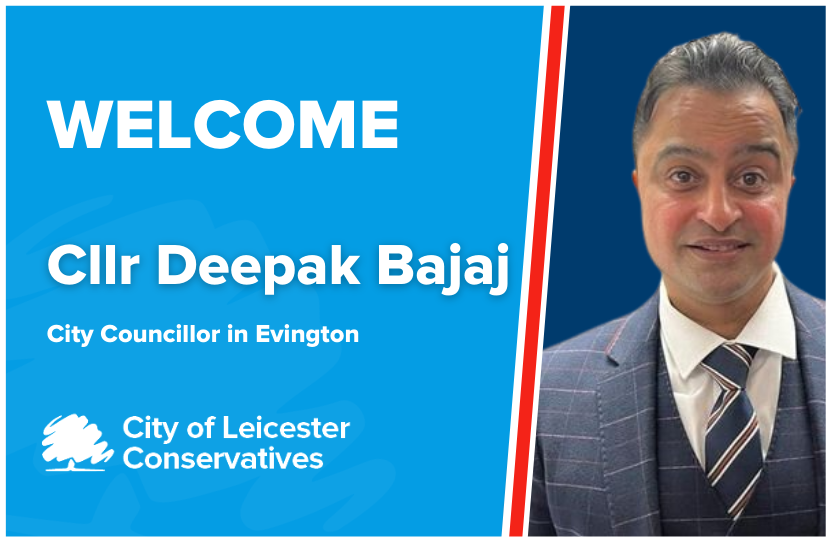 Evington Councillor Deepak Bajaj has announced he is defecting from Labour to join the Conservative Party in Leicester.

Crossing the political divide, Cllr Bajaj told his former Labour Colleagues that "the Labour led Leicester Council continuously blocks support from reaching those who need it within our city".

“Unfortunately decisions are often taken without proper engagement or consultation. A complete failure of democratic processes."

As a Councillor of over 15 years who has recently served as the city’s Lord Mayor, Cllr Bajaj said the city needed leadership that "upholds the highest standards of democracy and honesty, and unfortunately the current administration is not that."

Cllr Bajaj who is a Councillor in the Evington ward of Leicester East, said the Conservatives were a fantastic example of how freedom and democracy could allow anybody to be anything, he said "it was fantastic to see the fantastic array of leadership candidates that the party recently had on offer".

"Liz Truss will make a fantastic Prime Minister as our country’s third female leader but it was also great to see Rishi Sunak make the final two, the first time a British Indian has done so."

The new Conservative Councillor continued: "This isn't a matter of just deciding this morning that I wanted to be a Conservative- this has been many months in the build up.”

“I now want to get on with the job of serving the people who elected me. The priorities in Evington are bigger than ever before and I now have the opportunity to work for the people rather than be restricted by the Labour leadership in Leicester.”

Local Evington activist Jenny Joannou was pleased with the news of Cllr Bajaj’s switch, she said ‘I have known Deepak for a very long time and he is one of the few Labour Councillors that has really made an effort across Evington.

“I am looking forward to working with Cllr Bajaj on the key issues in Evington as we secure the future of our local green spaces and fight for a sensible plan to return for our community roads.’

The Chair of the Conservatives in Leicester, Richard Tutt stated “Deepak is an excellent addition to our team, he is not just a pragmatic politician but he is also a hard worker and a fantastic campaigner, I am proud to have him on board.”

Councillor Bajaj will join Councillor Crewe of the Humberstone & Hamilton ward to form a Conservative group on Leicester City Council.

Our Plan for Growth

Chancellor Kwasi Kwarteng on Our Plan for Growth in the economy