Our response to the City Mayor's Council tax letter 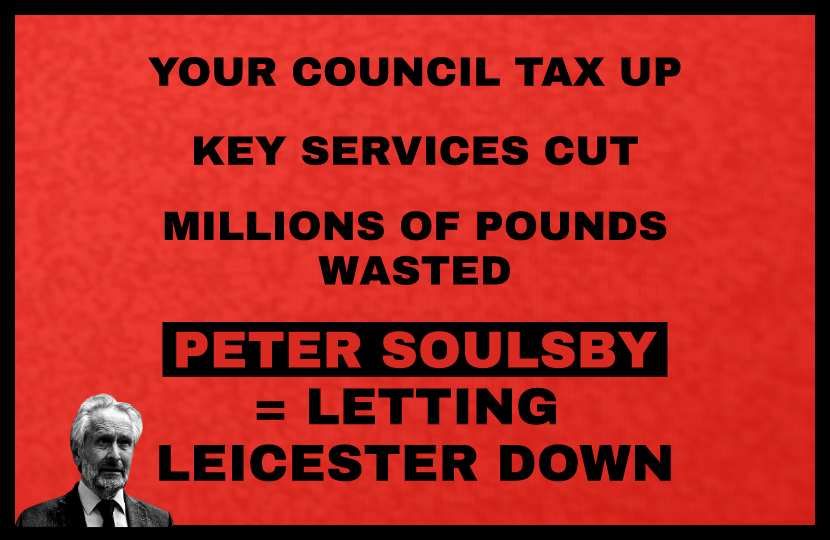 The Leicester Mayor, Sir Peter Soulsby, is consistent on wasting taxpayers money and hiking council tax to the maximum. Over the last five years, he has taken more than £280 extra from every household pocket.

There is no surprise though after you discover what he has committed to do with the people of Leicester's money:
£11.6 million to rebuild the museum, rather than rebuilding and supporting our local businesses and workers.
£13.5 million to rebuild a perfectly functional bus station, instead of supporting better connectivity around the city with a modern transport plan.
£600,000 loan wiped off from the failed Haymarket theatre
£500,000 for a "tree upgrade" would be welcome if he had not decided to bulldoze green spaces and playgrounds across the city. Green spaces which have proven critical to our health and well- being.
£200,000 for a series of graffiti projects, including a peeling colourful crossing outside of his office.

This is just scraping the surface of Soulsby's spending disasters, there is also the Haymarket theatre project, the Council's street lighting scheme and the failure of his energy company. All at the taxpayer's expense.

Soulsby has a habit of blaming everyone else but himself; your local councillor doesn't get a say; they're either told to shut up or are booted out before the next election.

Due to his leadership failure on COVID, we have been kept in lockdown for much longer than any other city. Meanwhile, the Conservative Government has provided over £43 million of support for Leicester's businesses, £7.7 million to upgrade our local NHS, £1.8 million to sort out the potholes plaguing our roads and increased funding for social care.

The Mayor has got away with the sad decline of our city for far too long. It's time he stops his vanity projects and gets back to what the people expect a mayor to do; maybe then we won't have a yearly tax rise imposed on us.

There are countless ways you can help the City of Leicester Conservative Federation, some of which are outlined below. If you wish to get more involved in supporting your local Conservative team, ring or e-mail our office for more information.