Conservatives plan to scrap the role of Leicester’s City Mayor 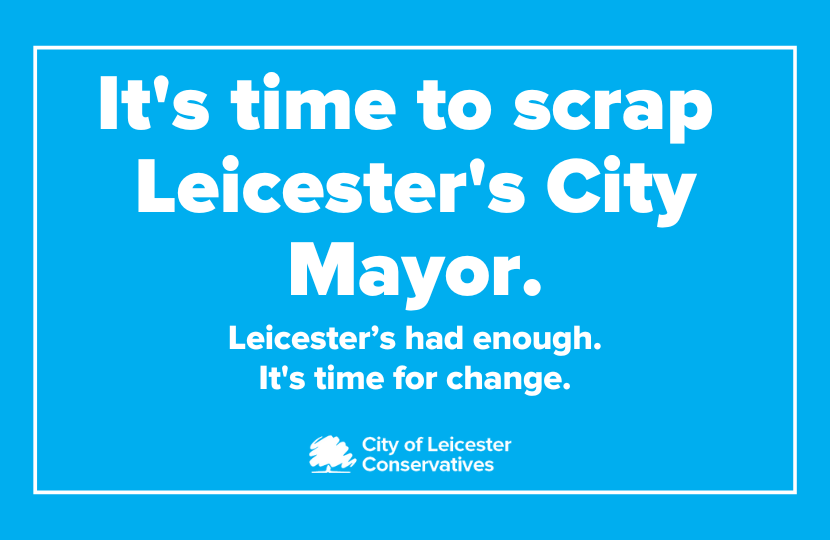 Local Conservatives announce that if they win the local elections in May next year, they will scrap the role of Leicester’s City Mayor.

The party who recently won in the North Evington By-Election want to return to a much more economical and more accountable Leader of the Council system that was successful in Leicester for the majority of its history.

As no referendum ever took place when the Mayoral system was brought in, the Conservatives plan on using a motion in the Council chamber to remove the system once they win a majority next year.

The party will select a Mayoral candidate in the coming weeks however they will stand on a platform to step down once a transition has taken place and a Leader of the Council is in office.

The Leader of the Council system is much more democratic and accountable for the people of Leicester. In recent years too much power has been taken away from elected ward councillors meaning local priorities get missed at a city level.

‘The City Mayor is a position that nobody in our city voted for, it was forced onto local people by a few Labour politicians including Peter Soulsby.

It is not right that one man in Leicester can have so much power. This is why the Conservative party have concluded that the role of the City Mayor in Leicester must be scrapped.’

The Chair of the City of Leicester Conservatives, Richard Tutt said

‘I am pleased to be finally announcing this policy that will act as a reset to our great city.

Many local residents have contacted our party in recent months to suggest that this is something we should do and our members have also voted in favour of removing the position of City Mayor.

I look forward to making our case during the Local elections next year where the people of Leicester have a very clear choice. Power to local people with the Conservatives or the status quo with the Labour party.

Does Leicester need a City Mayor?

Do you think Leicester's mayoral system works? Is it value for money? We want to hear your views below.

Stay up to date on this campaign